This is a new feature in TabSRMM 3 and replaces the old method of sending to multiple contacts. It also allows to schedule messages, that could not be delivered for whatever reason, to be sent at a later time. This feature should be considered experimental and there may be bugs. By default, it is disabled and you have to enable it on Message sessions → Advanced tweaks[tab] → Enable unattended send. A restart is required after changing this option.

There are 3 ways to use the unattended send feature

The main difference in multisend is that such jobs will not be saved to the database, so when you exit Miranda before all of them were delivered successfully, they are lost.

How often is the queue checked for new jobs

Once per minute (approximately). Adding a new job will force the queue to be processed within the next few seconds. Pending jobs will be checked about every 30 seconds whether they can be delivered.

When will scheduled jobs be sent?

This depends on the job type. Multisend jobs will be sent like normal messages and your current status mode is not taken into consideration. Jobs submitted by the send later feature will only be sent when your status mode is either Online or Free for chat. This is to protect your privacy – you probably don't want to automatically send messages while you are officially Away, Occupied or Busy.

The send queue will try to resend jobs at increasing intervals. After 5 unsuccessful tries, the job will be put on hold. Unsuccessful, in this context means that no ACK has been received for an attempt to send the message.

Jobs older than 3 days will be discarded from the queue. 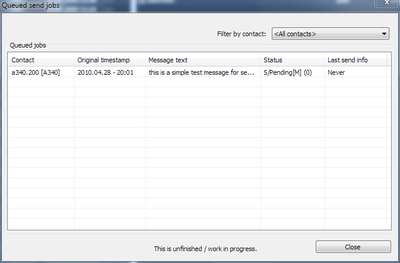 The UI for managing the list of open send jobs is available from the Miranda main menu under Send later job list.... The screenshot shows this dialog with a single queued message. Most of the information should be pretty clear, however, the Status field needs further explanation. The Status column has the following format:

The first letter can be either a capital 'S' or 'M' where the M stands for a multi send job while the S denotes a job submitted by the Send Later feature. The text is a plain text representation of the jobs status and the single letter enclosed by square brackets is a detailed status code. The last number (in parenthesis) is the number of send attempts.

The status text can take the following values

Meanings of the one-letter code in square braces